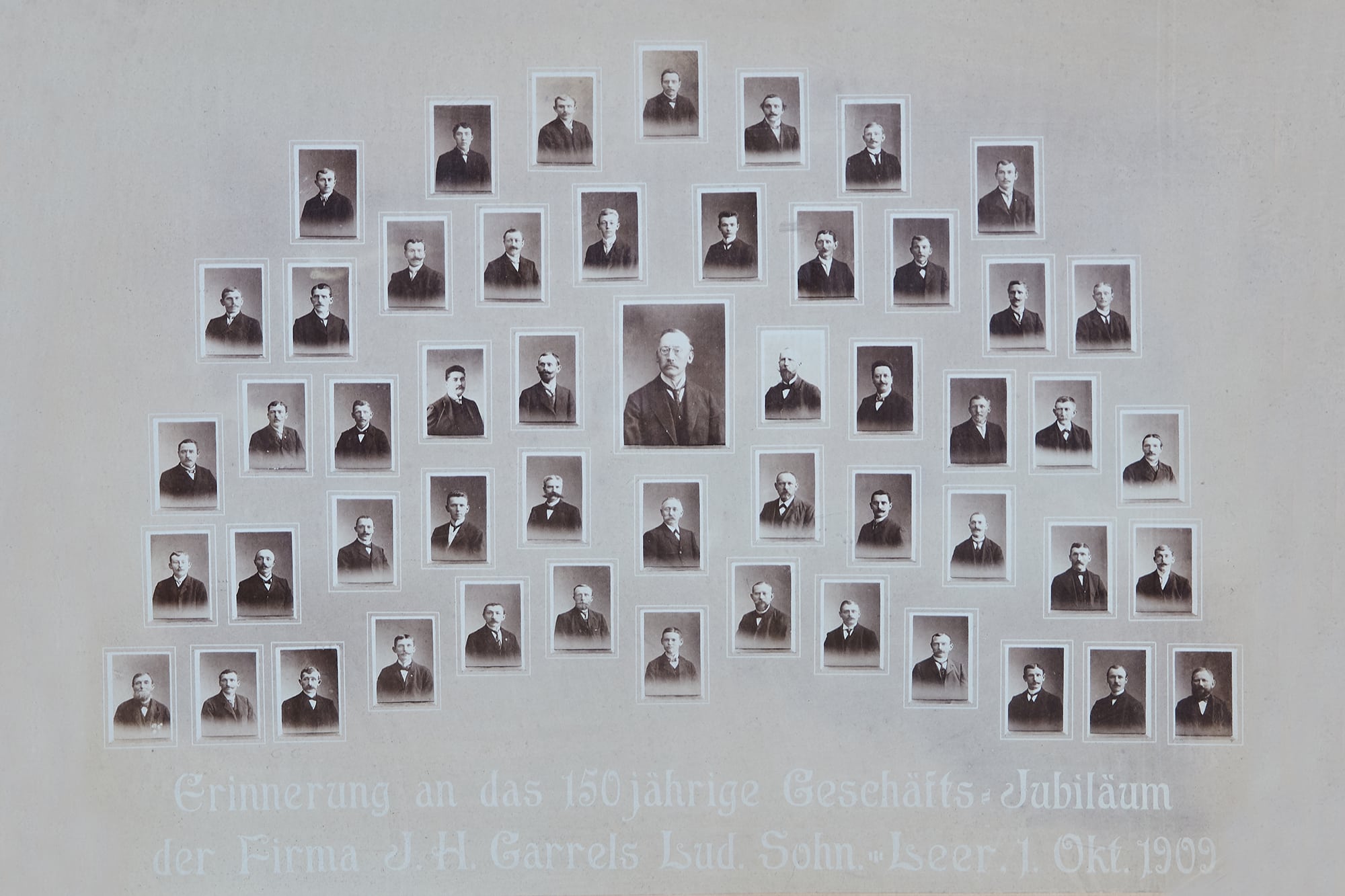 The new century begins successfully, but the First World War ends the upswing of the early years of the century: workers are called up for military service and the import of timber comes to an almost complete standstill. H.W. Garrels, who now runs the company, serves as a senator for the city of Leer during the war – but a successful timber business is out of the question. From 1917 the company premises are practically abandoned and the army uses them as a timber store.

After the end of the war H.W. Garrels rolls up his sleeves again and organises the rebuilding operations. With two new branches in Stickhausen and Weener, Garrels is even able to expand. In 1920 the company is then converted into a limited partnership. In the 1930s the buildings and machinery are modernised, and the steam boiler plant is expanded. The company benefits from the National Socialist economic policy, which promotes such modernisation and expansion measures.

During the Second World War Garrels again loses almost all of its employees, most of whom are called up for military service. The workers who unload the ships also lose their jobs, because during the war wood is no longer delivered by ship, but by rail or road. In 1938 Garrels still employs 78 workers, but three years later not a single one remains. However, unlike in the First World War, the supply of wood is guaranteed until 1944 thanks to deliveries from Scandinavia. In order to be able to process this wood and to replace the workers who are in the army, Garrels employs personnel from across the Dutch border and workers from German-occupied Ukraine. In April 1945 the area around Leer becomes a battlefield between the approaching Allies and the remnants of the German army, and the company premises are almost completely destroyed by aerial bombing during the last days of the war.

From 1946-1948 the company is under „North German Timber Control“, a department of the British military government. It is not until the department is dissolved in 1948 that the partners Wilhelm and Tjard-Ludwig Garrels, who have been classified as „exonerated“ during denazification, can begin to rebuild the company. It is a difficult undertaking, because the currency reform of 1948 devalues its last liquidity reserves almost completely.

However, in the 1950s a new era dawns and the „economic miracle“ becomes reality for Garrels, too. Demand increases and in order to meet the timber needs of the West German economy the company opens up new sources of timber overseas with imports from Brazil and Africa. Just in time for the company’s 200th anniversary Garrels opens a new branch in Loga, and in 1969 a new, larger warehouse is completed. But the upswing is followed by another decline: with the crisis in the West German construction industry in the 1980s Garrels, too, finds itself in a difficult financial situation that can only be overcome by drastic measures. These include layoffs, radical cost-cutting, taking out external loans, selling land and personal guarantees from the owners

German reunification in 1990 brings a revival of the economy, which also ensures a positive development of business at Garrels: the first fully automatic interlinked planing line is put into operation. However, there is no room for euphoria. In 1998 a warehouse with 3500 square metres burns to the ground. And when Tjard-Ludwig Garrels, a member of the 8th generation since the company’s founder, takes over his father’s inheritance as Managing Director in 1999, he finds a company that has over the years become far removed from its core skills and has been stagnating. A new start is urgently needed …

As time goes on…